WHAT THE JOES USE: TOP RIFLE BARRELS USED BY LOCAL PRS COMPETITORS IN 2019

WHAT THE JOES USE: TOP RIFLE BARRELS USED BY LOCAL PRS COMPETITORS IN 2019

A BACKGROUND ON THE 2019 PRS MARKET SURVEY

As we had mentioned in our introductory article, Precision Rifle Components and Wisconsin Precision Rifle Steel Challenge (WPRSC) recently teamed up to share usage data for a wide variety of rifle parts and accessories, ranging from barrels and optics to stocks and triggers.

This data was pulled from 626 registered shooters that participated in WPRSC events over the course of the 2019 match season. Our intention is to display this data in a manner somewhat reminiscent of Precision Rifle Blog’s “What the Pros Use” series, but with a focus on your average local PRS competitor.

The results of this study are a bit unique due to the nature of its geography. In case you weren’t aware, Wisconsin is the home to many of the finest barrel manufacturers in the world. This longstanding tradition found its roots with Boots Obermeyer nearly 60 years ago.

Boots was an early influencer in the creation of Krieger Barrels, a company that had served as a contract job shop passed down through multiple generations of the Krieger family. John Krieger first began producing barrels in 1982, gradually shifting its operation entirely toward barrel manufacturing. Legend has it that both John Krieger and Mike Rock (of Rock Creek Barrels) both had their first rifling machines delivered on the same day by the same flatbed truck.

Both organizations quickly took the barrel manufacturing world by storm. Over the course of the next few decades, both businesses directly inspired the creation of a number of other barrel manufacturers. Former Krieger employees now own and operate Criterion and Bartlein Barrels, while former Rock Creek employees now own and operate Broughton and MullerWorks Barrels. Other Wisconsin companies like Brux and Vortakt Barrels have also established themselves as premium barrel manufacturers known well in certain circles of the firearm industry.

WHY IS THIS STORY RELEVANT?

It’s important to understand the history of Wisconsin barrel manufacturing because a number of these businesses are heavily represented in the data provided below. While many of them are also listed as top manufacturers in the “What The Pro’s Use” series, each of them have also heavily invested in WPRSC match sponsorship (a number of current or former employees are also active match participants), so it stands to reason there is some geographic and sponsorship bias that has influenced purchasing trends among WPRSC competitors (who this year hosted the aptly named “Wisconsin Barrel Maker Classic”).

That said, all of the above brands produce hand lapped match-grade barrels that hold remarkable tolerances. There is no doubt that PRS shooters can remain competitive using barrels from any of the aforementioned manufacturers! Founded by Tracy Bartlein and Frank Green, Bartlein Barrels manufactures some of the finest single point cut rifled barrels in existence. Bartlein offers bore and groove tolerance of +.0005, a bore/groove uniformity of +.0001/-.0000, and a twist consistency carried to the fourth decimal point. Their ability to effectively regulate twist provides rifle builders with an opportunity to order their barrels with a “T” style rifling that can accommodate gain or reverse gain twist rates.

Bartlein Barrels are used by a variety of custom rifle builders, including PRS giants like GA Precision and Area 419. Finished pre-fit barrels are available through retailers like Bugholes.com and Eurooptic. There is no doubt that Bartlein has recently dominated the precision rifle market, taking top billing in both “What the Pros Use” and “What the Joes Use” article series.

Criterion was originally founded as a button-rifled alternative to Krieger Barrels. Steve Dahlke, Criterion Barrels’ owner and founder, had long served as General Manager of Krieger Barrels, where he was approached by Weatherby to serve as an OEM supplier for their Mark V rifle line. Krieger’s single point cut rifling process was unable to meet the production requirements outlined in the contract, so both Steve and John Krieger collaborated on the creation of the company. As Criterion Barrels grew in size the two organizations eventually separated interests, now operating as wholly independent business entities.

Criterion has been long known for their production of match-grade vintage military rifle barrels for the Civilian Marksmanship Program and Fulton Armory, and has recently risen to become a high-grade OEM supplier for a variety of different premium rifle manufacturers. Quite often Criterion barrels are also white labelled under different brand names – a few of which have also made an appearance on this list.

The biggest benefit to these barrels are that they are easily removed and installed (an experienced rifle builder can switch pre-fit barrels out in 15-30 minutes). Inventoried by Northland Shooters Supply, Brownells, and Solid Accuracy, Criterion pre-fit customers can save hundreds of dollars and months of waiting for gunsmith services when compared to their traditional shouldered counterparts.

Long known as the standard by which all others are judged, Krieger Barrels shooters have set countless national and world records (including the world’s smallest group ever fired in competition (a 5 shot .0077” group at 100 yards). With over 35 years of cutting edge barrel manufacturing experience, Krieger Barrels continue to maintain a strong presence in High Power, Benchrest, F-Class, and PRS disciplines.

While the previous three manufacturers feature a shared history and origin story, PROOF Research is an entirely different animal. Founded in 2012, PROOF is one of the new kids on the block. One of the first manufacturers to effectively leverage carbon fiber wrapping technology in the barrel manufacturing process, PROOF Research’s Advanced Composites Division also develops and supplies high-temperature products and solutions within the aerospace and defense industries.

The above barrel manufacturers typically specialize in one rifling method or the other (button or single point cut rifling). Rock Creek offers match-grade barrels leveraging either rifling solution! Well known as an OEM supplier for premium brands like Seekins Precision, Rock Creek has a longstanding reputation as a quality barrel manufacturer.

Yet another Wisconsin-based manufacturer, MullerWorks was recently split into two separate companies owned and operated by Dan Muller and Andy Benz. Andy’s portion of the business is dedicated to order management and marketing efforts, while Dan places his focus on product development and the manufacturing process. Dan is also an accomplished artist who features a selection of his work on the MullerWorks website.

Best known for their line of precision rifle chassis, Masterpiece Arms has a diverse product portfolio ranging from top-cocking MAC-10 derivatives to their own line of sound suppressors. Six years ago Masterpiece Arms purchased Spencer Rifle Barrels, providing them with the in-house capability required to produce world class rifle barrels. Masterpiece Arms barrels can be purchased finished and installed on their custom rifle line, or acquired separately as a contoured barrel blank.

No doubt factory barrels attached to many of the Ruger Precision Rifles outlined in our previous “Top Actions” article, Ruger is the leading manufacturer of cold hammer forged barrels used in the “What The Joes Use” market survey. Featuring a 5R rifling pattern, these barrels can occasionally offer surprising levels of accuracy.

Yet another Wisconsin-based single point cut rifled barrel manufacturer, Norm Brux founded his business in 2006. Ken Liebetrau’s recent retirement led to Ken Clemen’s onboarding as a co-owner of Brux Barrels. Brux Barrels relies on skill, experience, and high quality tooling to produce their record-setting barrels. Brux is a dominant force in the world of F-Class, led by skilled sponsored shooters like Bob Sebold.

Patriot Valley Arms barrels are typically turned and chambered Rock Creek button and cut-rifled barrel blanks (barrels can be turned from other manufacturer’s blanks upon request). Offered in a variety of pre-fit and shouldered configurations in a number of different shank patterns, Josh Kunz’s shop is well known for their custom component manufacturing and gunsmithing services.

Button rifled barrels manufactured in Bergera, Spain; each of these barrels features a honed internal finish. These barrels are commonly found in Bergara’s Premier and B-14 line of rifles, and have been used as OEM blank options for select rifle manufacturers. 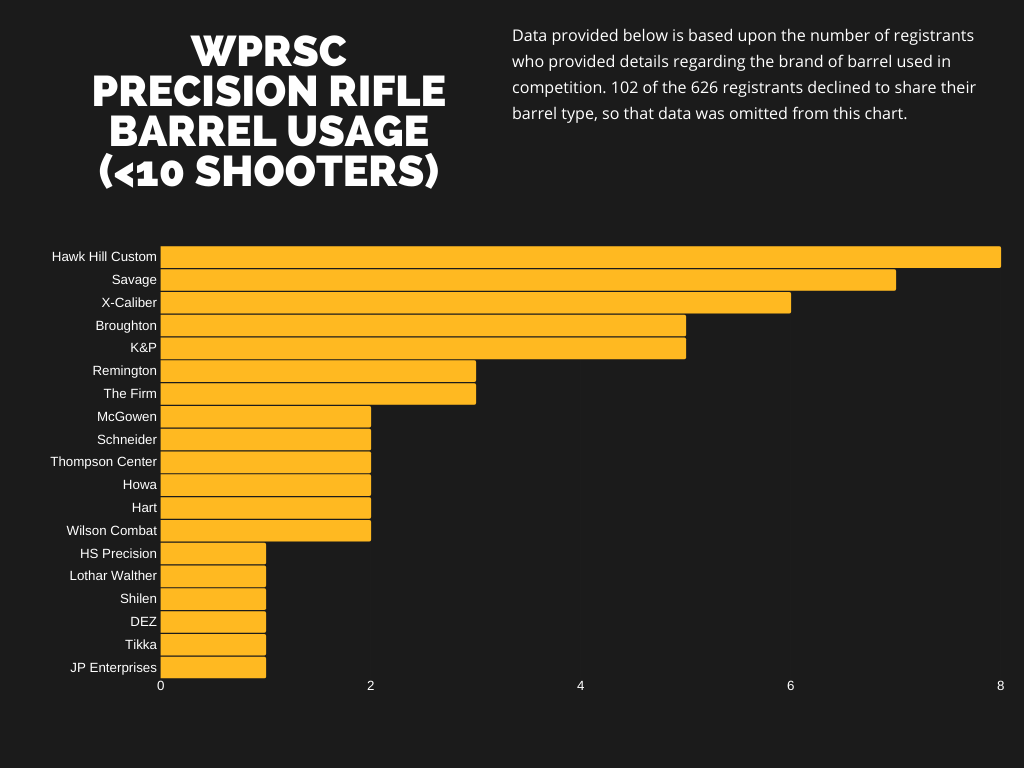