Oops! We could not locate your form.

The Right to Bear Arms is Under Siege: Here’s How You Can Fight Back Against Gun Control

Make a Positive Impact Through Your Local Firearm Community

It seems as though there is something that pops up in the news each and every day that demonizes gun owners and the people who build their firearms.

Joe Biden recently labeled some of my best friends as “The Enemy”. San Francisco’s Board of Supervisors recently labeled the NRA and all of its members as domestic terrorists. Walmart is pulling ammunition from its shelves and discouraging their customers from carrying firearms for their personal protection. The Federal government is collecting a comprehensive list of over 10,000 users of a night vision scope app in an unprecedented invasion of privacy. Some presidential candidates are even unabashedly calling for firearm confiscation!

It’s Easy To Complain, But The Gun Control Problems Remain

If it feels like you’re being backed into a corner by politicians, the media, and major tech companies in Silicon Valley, then you’re in good company. Spend some time browsing the comment sections of industry publications, Facebook groups, and gun stores across the United States, and you’re bound to hear plenty of folks grumbling about the dim prospects of the Second Amendment.

Who Owns The Messaging? The Media and Silicon Valley Run the Show

The gun control debate is largely driven by ignorance. If there’s one trend we’ve seen throughout the course of the 21st Century, it’s that Americans are willing to sacrifice their personal liberties in pursuit of the illusion of safety. This impulse is largely influenced by sensationalist journalism delivered through search engine traffic and social media exposure to a variety of major media outlets.

These organizations derive a good chunk of their ad revenue through additional clicks and impressions generated by violent news stories, leveraging a formulaic approach toward each mass shooting and gun-related crime. Believe it or not, some gun-control organizations have even published playbooks to work from after each shooting to gain additional media attention.

If that isn’t enough, the twin tech giants of Facebook and Google have gradually stepped up efforts to censor advertising, discussion, and commerce online. Credit card processors, insurance providers, and eCommerce retailers have done their best to run gun companies out of business through restrictive terms of service due to the influence of Obama era directives and the efforts of gun control groups.

If you want to activate “hard mode” in putting together or operating a small business in an extremely regulated and hostile business environment, there’s no doubt that the firearm industry is a good place to start.

As much as I hate to admit it, the firearm industry is gradually losing the public relations battle. The NRA is beleaguered by waste and infighting, the NSSF’s influence and interaction in local communities is limited, and other second amendment groups have a relatively small membership base. While the firearm industry is labeled as a major influencer on DC politics, a quick search proves that their contributions are minuscule when compared to behemoths like the healthcare and insurance industries.

So where do the politicians that the firearm industry lobby for stand? Republicans in the Executive and Legislative branches of government are more than happy to drag their feet on gun rights bills like the Hearing Protection Act and the National Concealed Carry Reciprocity Act, while the Judicial system is content to ignore unconstitutional bans or change their mind on well-established regulatory positions on a whim.

With all these chips stacked against us, who can you rely on?

We need to rely on ourselves!

Rather than simply grumbling about the unfortunate circumstances we find ourselves in, we need to take it upon ourselves to do our part to provide non-gun owners or indifferent gun owners with positive experiences involving firearms. Education is the enemy of ignorance, and is currently the most powerful tool we have at our disposal.

Gun owners are some of the most genuine, honest, and trustworthy people I’ve ever had the pleasure to meet. Simply attending a 3-Gun or PRS match and observing your surroundings proves this point. At what other venue can you leave a man portable item worth more than $5,000 sitting around in a field without fear of theft? When was the last time you’ve heard of a mass shooting at a gun show? The fact of the matter is that while a stream of horrific incidents have been plastered all over campaign speeches and news articles, they are the exception, not the norm.

So how can we change this perception? I’m glad you asked!

1. Take a New Shooter to the Range

The simplest way to eliminate ignorance is through experience and education. Inviting a non-shooter to the range is an excellent way to accomplish both of these goals. Preface this trip with a brief lesson on how the firearm operates, the various safety rules they will need to follow when using the firearm, and some of the fundamentals of marksmanship. Start with a low recoiling cartridge that features minimal report to make their first range trip as pleasant and as stress-free as possible. If you have a sound suppressor, thread it on your muzzle to make their experience even more enjoyable. That might help improve their opinions on NFA items as well!

2. Invite a Friend to Participate in a Project Appleseed or CMP SAFS Course

Both the Civilian Marksmanship Program and Project Appleseed offer programs that provide marksmanship instruction to novice shooters. A few years back I had the pleasure of attending the CMP’s Small Arms Firing School (SAFS) at Camp Perry. The beauty of SAFS is that the CMP provides all the equipment and ammunition required to participate at a fairly low cost, so just about anyone can attend. These days you won’t need to take a new shooter all the way out to the National Matches, as the CMP has begun to offer regional classes across the country.

Project Appleseed also offers a number of introductory courses and clinics across the country. Details and locations can be found on their website here. Bring a new shooter, a rifle, and some extra ammunition with you to a Project Appleseed shoot near you!

3. Invite a Friend to Volunteer as a Range Officer at a PRS or 3-Gun Match

If your co-worker, friend, or family member isn’t ready to pull the trigger on a firearm themselves, ask them to join you at an upcoming match to help as a range officer. Even if you’re taking on the primary responsibility of scoring and spotting impacts, giving them the chance to watch a competitor in action presents them with an opportunity to see how firearms can be used in a safe and responsible manner.

This one requires a bit more commitment than others, but it also provides a bigger impact for your local shooting community. Perhaps you’re a PRS competitor who shoots regularly at your local range venue. A good way to encourage participation and grow the sport is through gateway rimfire leagues like NRL22.  Bring an extra rifle and a brick of .22LR ammo, and invite a few new shooters to give the sport a try! Your local PRS match director will likely be more than happy to lend their assistance and expertise. After all, you’ll be infusing their league with a number of new shooters as your novice competitors grow in experience!

5. Develop Outreach Programs with Firearm Industry Retailers and Manufacturers in Your Area

Firearm industry manufacturers, wholesalers, ranges, and retailers are always on the lookout to support local shooting sports. The inaugural Wisconsin Barrel Maker Classic (you can find the PRC guys at 1:51) was a prime example of this phenomenon! If you can provide companies with opportunities to showcase their products and grow their business, they’ll usually be more than happy to throw their hat in the ring!

Whether it means working with your area High School or College in starting a rifle team or trap shooting program, providing the local Boy Scout troop with the funding and resources required to participate in their Rifle Merit Badge, or assisting local Hunters Safety Instructors with their next class, these public outreach programs offer excellent public relations and marketing opportunities for area businesses.

6. Volunteer Your Time as a Firearm Instructor

One of the most fulfilling experiences I enjoyed this year was an annual six week period working as a precision rifle instructor for Wisconsin Firearm Training Center. Most of my students never had the opportunity to engage a target beyond 300 yards, and were amazed when we managed to get them ringing steel at 1,000 yards with good DOPE and a little guidance on their wind holds. After a few classroom sessions and a final practical application range day, these shooters were placing in the middle of the pack in the Wisconsin Precision Rifle Steel Challenge!

You don’t need to be a former Special Forces Operator or an Olympic Gold Medalist to introduce shooters to your discipline of choice. So long as you have a solid grasp of marksmanship fundamentals and a good knowledge of your rifle platform, you’re more than qualified to teach a new shooter how to responsibly handle a firearm.

You don’t need to introduce hundreds of new shooters to your marksmanship discipline of choice to make a difference. A recent Gallup poll estimated that 30% of U.S. adults personally own a firearm. If each and every gun owner provided a non-shooter with positive experiences surrounding the safe and reliable use of firearms, the debate surrounding firearms would come to a swift end.

As ideal as that scenario might seem, attaining the level of commitment required to protect our personal liberties and constitutional rights is highly unlikely. The core institutions that were created to defend our personal liberties may very well be dedicated to their demise (in some aspects at least), but it is still our personal responsibility to try our hardest to turn the tide on the gradual regulatory encroachment that we currently face. 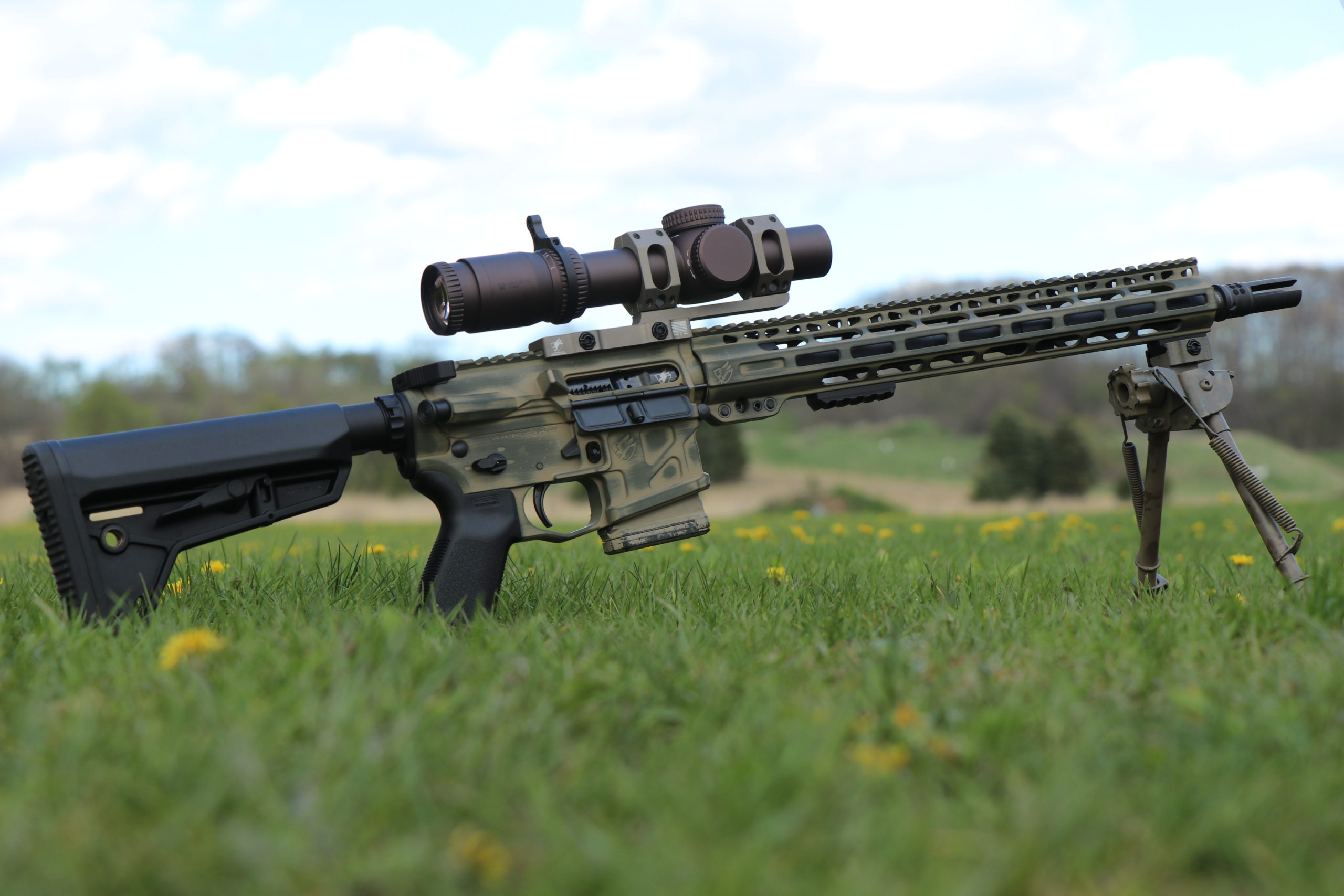 Cloning My Most Accurate AR-15 Build My History With The ADM UIC Mod 2 Have you ever sold a rifle and instantly regretted it? My

WHAT THE JOES USE: TOP OPTICS MANUFACTURERS USED BY LOCAL PRS COMPETITORS IN 2019

MOST POPULAR SCOPES USED IN LOCAL PRS COMPETITION A BACKGROUND ON THE 2019 PRS MARKET SURVEY As we had mentioned in our introductory article, Precision Rifle